When I was living in Tucson, it was pretty common to find Chili con Carne on the menus in the Mexican restaraunts. Today, I’d have to classify that Tucson style I remember as “El Paso style”. Out here in Austin, the Tex-Mex is just a little different and there isn’t as much chili in it. I still yearn for the former so I looked into what it takes to make it for myself. Possibly, I might also share some with my family and friends.

You have to start with chilies of course. While you can get the dried chili pods in the produce section at H-E-B, I happened to remember being able to pick up chili pods in half pound bags at the Tucson grocery stores. Here’s what I used to see there:

I have also found them at tourist stops along I-10 in New Mexico. It’s now possible to order these on line. Now I have my own El Paso connection: Joey’s mom! She graciously brought me about three year’s worth on top of his last order from home.

OK, so here’s the recipe I use: 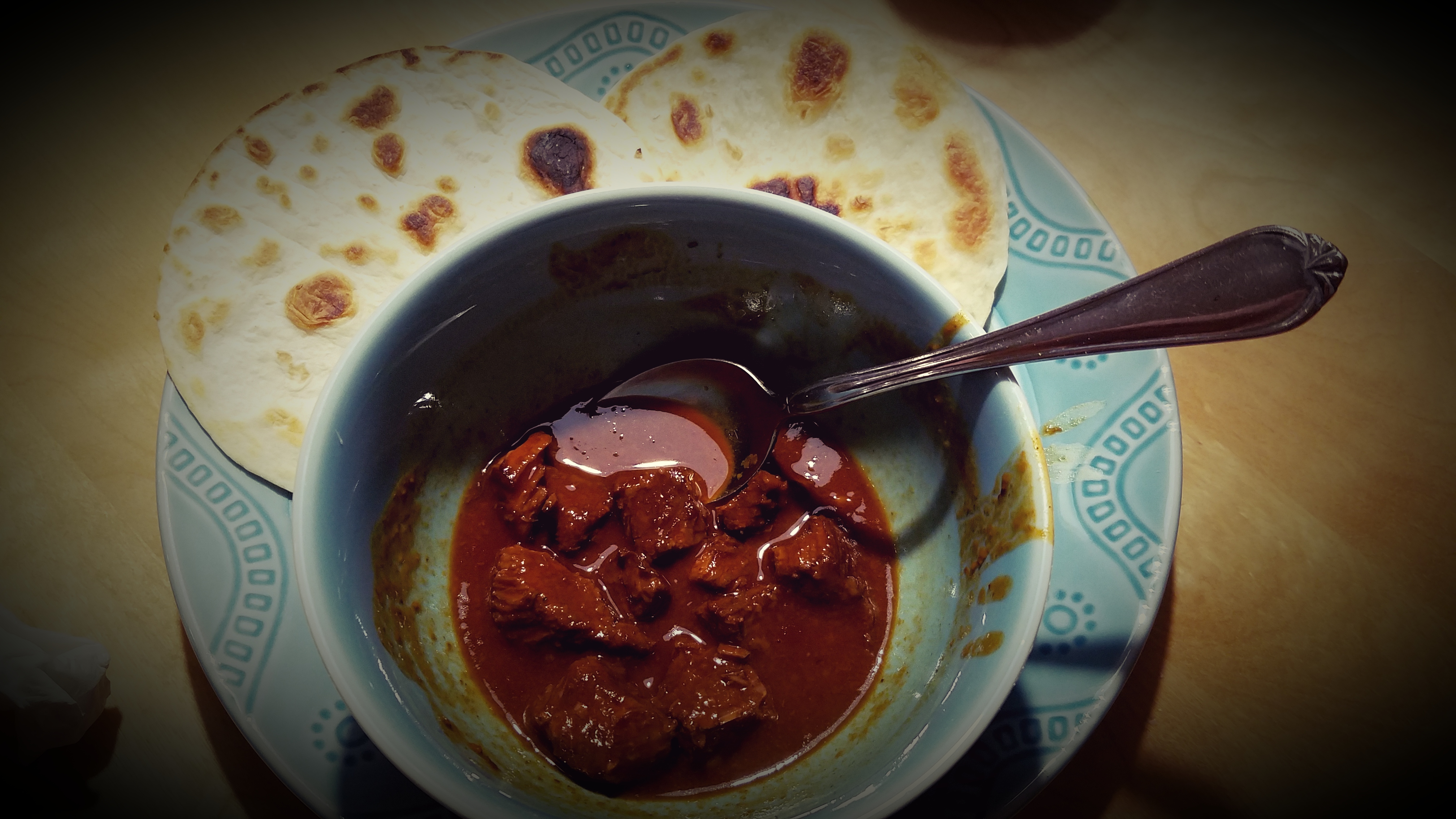 Quarter the onion and peel the garlic. Roast both on a sheet of aluminum foil in a 350°F oven for 30 minutes.

Remove stems and seeds from chili pods, and place them in a 3 quart stockpot. Add 4 cups water and bring to a boil over medium-high heat. Turn off heat, cover, and let chili peppers soften for about 20 minutes.

Set about 2 cups of the watery chili liquid aside and place the remaining liquid and chili peppers in a blender. Add onion, garlic, cumin, and oregano. Puree the mixture.

Over a large bowl (8c Pyrex mixing bowl) pour the chili sauce mixture into a strainer. Scrape a rubber spatula on the inside to keep the strained liquid flowing out. Strain as much liquid as possible.

Save/freeze the remaining solids in a zippered sandwich a baggie for Taco Tuesday or maybe some home made Chili-O.

Trim the meat and cube it. Season the meat cubes in a gallon Ziploc bag with flour and salt. Brown the meat in the oil on high (in 2 batches) using an open pressure cooker. Return all the cooked meat to the cooker.

Dissolve the beef bouillon in the 2 cups of watery liquid. Add that, the bay leaves, and the strained chili liquid to the cooker. Stir.

Simmer to reduce if desired. Add a tablespoon of flour mixed in cold water if running short on simmering time.

Salt and season to your taste. Maybe another ½ tsp salt, ½ tsp cayenne pepper?

Back Burners (by month)